The Hobbit: Exciting And Dynamic Casting 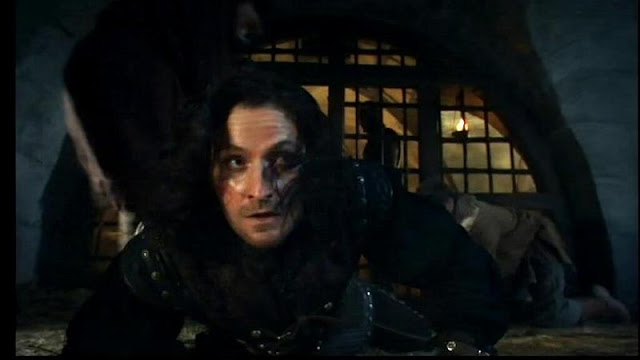 One of many exciting and dynamic moments of RA as Sir Guy of Gisborne
in the tv-series Robin Hood (2006)
Geez, I turn my back on internet for a couple of days to go to Narnia and there is news about some tall, dark "hot tottie" (excuse my language) joining the cast of The Hobbit as a Dwarf fighting a dragon! Hopefully he does the full works: with braids in beard :).

Strangely I was thinking about dragons last week. Some months back I watched the movie Eragon (not Aragorn) on tv. It was about a gentle dragon. By chance I managed to get a copy of this booklet The Making Of Eragon by Mark Cotta Vaz. It has a great read how to act opposite an imaginative dragon.
Another example is the mini-series The Color of Magic, which has David Jason and a dragon and is at times hilariously funny! Maybe I write a separate post on dragons in movies/tv-series someday.

But no matter who would be appearing in The Hobbit, I would still buy my ticket for the cinema, as I have seen the three movies of Lord Of The Rings on the big screen and later on borrowed DVD´s. Went with someone who was proud to have read these books, while I had to learn the story as it was presented, with all these visually stunning scenes.

To my surprise, I was really moved by Smeagol/Gollum !! After seeing the DVD extra´s, I learned that Andy Serkis was initially on board just to mimic Gollum´s moves for computer graphics and was later on recognized and properly acknowledged for his acting talent. I assume that was done by it´s director, Peter Jackson.

Now recently Peter Jackson said on casting RA for The Hobbit: “Richard is one of the most exciting and dynamic actors working on screen today and we know he is going to make an amazing Thorin Oakenshield. We cannot wait to start this adventure with him and feel very lucky that one of the most beloved characters in Middle-earth is in such good hands.” (1) If you need proof, take a look at RA´s showreel for example.

“Thorin Oakenshield is a tough, heroic character, and he certainly should give Leggie and Aragorn a run for their money in the heartthrob stakes — despite being four feet tall,” says Jackson, who also announced seven lesser-known English, Irish, and Kiwi actors in the roles of other dwarves. “In Middle-earth, dwarves are a noble race and have a culture and physical appearance which sets them apart from humans. It’s fun to develop these different cultures for the movie, and we are doing much more with dwarves this time around than we did with Gimli in Lord of the Rings. Our company of thirteen dwarves in The Hobbit lets us explore many different personalities — and costume and make-up designs will support the type of character each actor plays. Richard is a powerful actor with a wide range, and we’re very excited to be handing Thorn over to him. In this partnership, we need Richard to give us his depth, range, and emotion as an actor — and we’ll make him look like a dwarf!” (2) A heartthrob Dwarf, noted, so no beard?

“We’re auditioning for every role,” Jackson said in an interview, adding he is a big believer in casting a wide net to better match actors with the roles. “What we’ve done over the years is discover a lot of interesting actors, like Orlando Bloom (in ‘Rings’), Kate Winslet (in ‘Heavenly Creatures’), Saoirse Ronan (in ‘The Lovely Bones’). So if you start looking and auditioning seriously, it’s amazing what incredible talent you’ll find out there.” (1) See link of clip in which he said that TH or LOTR are not star-driven films, Tolkien is the star: finding the right people who can do a Hobbit or a Dwarf.

Auditions often involve multiple sessions, readings or interviews and for films of this size the net would likely be cast wide causing the process to be a lengthy one. Likely cast members are called back to read with other actors to test for chemistry and rapport, extending the process for weeks or even months. (1) 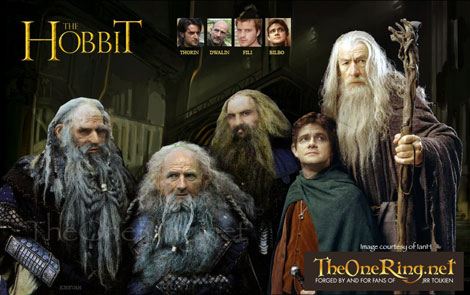 Would it look like this? Too many beards, if you ask me
Meet the demands

[THORIN OAKENSHIELD] Heir to the Dwarf Kingdom of Erebor, Thorin Oakenshield was forced to lead his people far away from their homelands into exile in the Blue Mountains. Powerfully built and a legendary fighter, Thorin has led a tough and dangerous life and it shows on his face. He is sharp eyed and sharp tongued, proud in his bearing and un-trusting of those he does not know. But Thorin is also capable of intense loyalty, immense courage and surprising gentleness and humour. Thorin will be required to wear a wig and beard and some minor prosthetics make-up, like a nose or forehead, is possible. LEAD. AGE: EARLY 40’S to MID 50’S. ACCENT – STANDARD R.P. OR SLIGHTLY ACCENTED REGIONAL ENGLISH ACCENT.

What they were looking for...read more here.

http://mulubinba.typepad.com/an_ra_viewers_perspective/2010/10/well-i-may-have-got-the-role-a-bit-wrong-but-.html  OK, one of them

**Find more links on my blog in the sidebar: Hobbit Country**