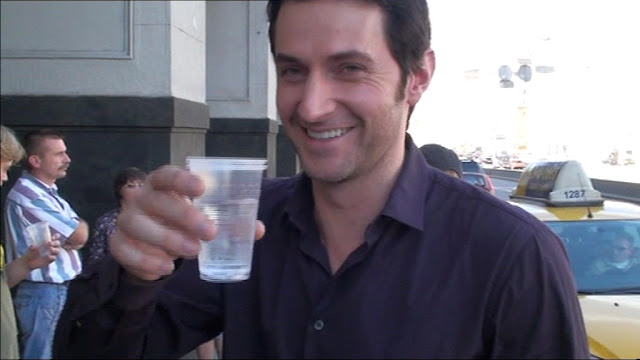 "You will looooooooove every RA drought! Wait, I´ll take a sip."
It may be imminent, that EricV, embedded blogger on the Hobbit set, will come with Hobbit news. He joined the crew to visit the front, and has already spoken with Mr. A and Aidan Turner, but that is so much as the leaks on his twitterfeed can tell. If his set-pictures get the "go ahead", we will read his latest adventure on hairy feet any day now.
On the set of Flik*ken Maas*tricht
EricV may be happy to be embedded on the Hobbit set for two months, he did not get there by crashing hobbit holes. Lately I visited Maastricht on a day trip and ran into the set of Flik*ken Maas*tricht! Did I in an earlier post tell about my visit on the set of Dr. Chee*sy, I now could compare a bit the way cast and crew worked. Another reason to witness the activity, was that I challenged my writing by joining a contest. And for daring, I did an audition too! It was a true confidence boost! Not that I expected anything to come out of it. Mantra: "office joooooobs"! Yes, and less blogging. There is homework to be done.
Flik*ken Maas*tricht is a tv-series that runs for 5 seasons on Dutch and Belgian public television and is filmed on location. It is a police show and has a lot of banter between the two leads, who have something going on. Have seen some episodes and currently I´m catching up! 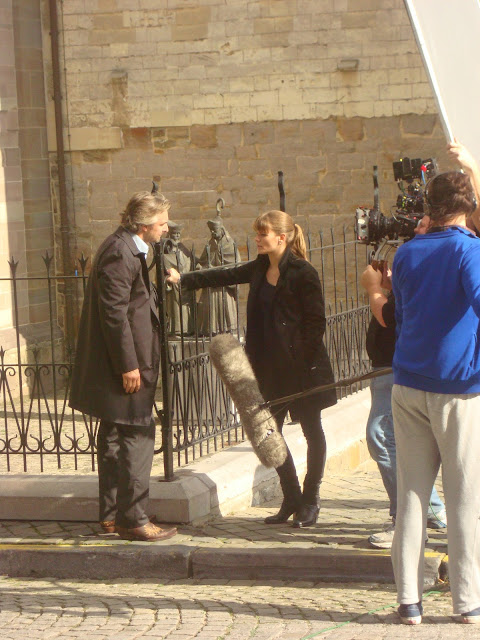 **
Like to say this in German (auf Deutsch) "Die Stars der TV Show, Vic*tor Rei*nier und An*gela Sch*ijf".
The German border lies fairly close to Maastricht, and the German prononciation of "Stars" implies
an unreachable distance to people who are on TV for a living.
While in my country there is a whole ´nother perception: "Act normal, then you´ll act crazy enough".
**
I was alerted to this set by a 60-something year old couple of which the man with a grey ringbeard and a huge professional camera enthousiastically told me he had to leave the set, because of his camera.

Filming was going on for some time already when I came close. Passers-by came and went, and stood still for minutes to catch a bit of the magic. The magic was not at all there. Between shots makeup was done, hair was fixated with hairspray and a hot-water bottle helped to remain comfortable.The passers-by were also taking pictures with their smart phones and digital cameras, so a lot of delicate clicking sounds was heard. Picture taking was okay while in rehearsal. I stood at 10 metres distance and could not quite hear the conversation.
This shot was taken several times, very swiftly.
** 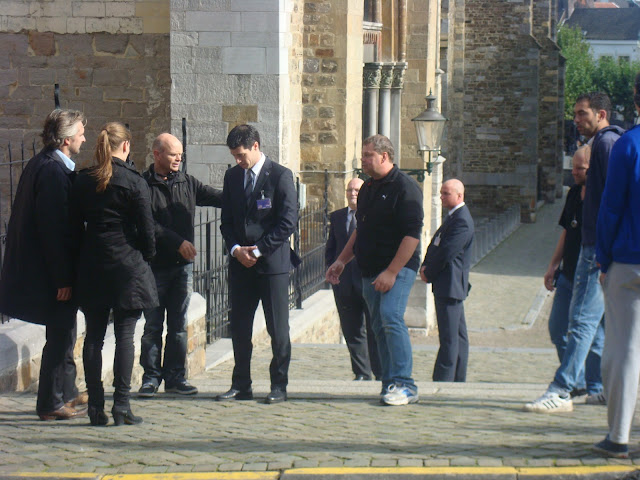 The contra shot in which the leads get interrupted by an American security guard type. It was important this man stood at the correct spot. A closeup of the conversation was taken twice.
Because a ray of sunshine appeared between the clouds, the collection of shots was quickly added with an extra shot, of them walking in the street, up to this corner.
Then it was off to lunch, a temporary campement of long tables and vans parked behind the church.
**
In the background are two churches.
One of them had four vehicles parked outside with American numberplates.
Contemplating why this was, I got tapped on the arm.
A very small, but intrigued American lady with flickering eyes asked me who was visiting the church!
In Spooks series 9 they called this person "Lighthouse". Made me think of that episode on the spot!
Inside the church, big lights stood ready for later to be shot scenes after lunch.
In the other church, next to this one, in a tomb, two young women with nail pistols were preparing a scene by nailing blankets to a wooden trunk, to hide this VIP for dangerous reasons..Had a friendly chat about the scene, their company and their profession (interns to become director).
They revealed it was all for the latest episode of series 6 to be broadcasted in March 2012.
**
So, if you consider working outdoors, and are very patient, then consider working for a tv series.
Screencap of Spooks 7, DVD extras on set in Russia (RACentral)
Pictures Flikken Maastricht latest episode of series 6  (MyVeryOwn)
Posted by Violet op 19:37 2 comments:
Email ThisBlogThis!Share to TwitterShare to FacebookShare to Pinterest
Labels: Acting, Cast, Films, Locations, Reflection, Review, Richard Armitage, Scripts, Set, The Hobbit, tv-series
Newer Posts Older Posts Home
Subscribe to: Posts (Atom)