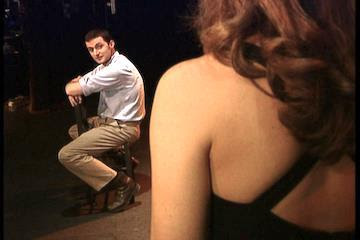 "Humour won't get you out of this one, sweety. Why didn't you order 'Staged' ?"
Well, that's personal. I would love to! It would bring back the days that... (censored).
But if someone would be so nice to send me a copy? Because this dress was expensive enough.
"You talk around it."
Stop it! People may think we are abusing this filmlet as illustration of an argument.
"Aren't you? You haven't seen it and still you're pretending that you ship 'acting and writing'."
Alright, I'm reading five really good books at a time now.
"We should discuss this, and not in your head. Why don't you say what you want to say?"
Based on only gushing? No you better 'use your gushing'. Well, I guard my gushing, what about you?
"Look, I don't know where this is going. Can we keep smiling?"
The script says we should do some scenes on the bench. And I don't have to undress.
***
Maybe I should have said: I didn't order STAGED yet.

Apologies for my belated (crappy) conversation
﻿