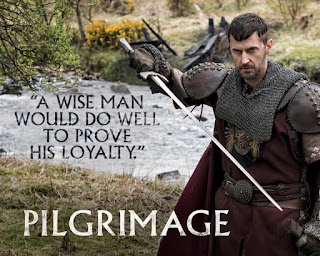 My reason for getting the Pilgrimage DVD, other than RA, was to get back to the Middle Ages. I tend to romanticize this era, while in movies and TV series it is often an excuse to showcase extreme violence and strict religion. Hence Pilgrimage was a mediaeval, gory ride in the Irish park on Sunday. Breathy, spacious, gory, succinct. Trained fighting pragmatism versus amateuristic brute force. Battle cries in Gaelic, French and English.

The monastery with monks keeps the relic of which the prologue tells its tragic tale. Then a Cistercian visits the monks with a mandate letter. The Pope's church in Rome is now the designated holy stronghold. A few monks go with him and underway they encounter opposition, instead of protection. The relic is won back at any cost.

Standout performances to me, first by the Mute with his reflective silences, who fights his inner struggle and gives extra breath to this story. Second, by snarly Sir Raymond (RA) who should offer the monks protection with his crusaders from Normandy, then turns out to steal the relic feeling the church can wait. Doing Crusades and making allies is more important. Grognements ensured!

This movie answers reflectively by showing actions and motives on the question: 'Is it worth it to give a relic this amount of cultural and religious value?'. It cleverly ends on the question: 'Where to go now?'. After almost every main character gets finished off and the relic is being baptized into the sea forever, viewers can fill in for themselves: 'Back to the monastery with empty hands or to continue with another rock?'.

I wish I could have fathomed the spiritual depth when I came into contact with mediaeval relics on an Italian visit years ago. Although it was more like a close encounter with perishableness, Especially, because one relic was the thybone of a priest wrapped in a shiny pink ribbon, nicely kept in a glass box with golden edges, and another relic was a shriveled, darkened woman's hand in a tiny box, electronically lit up in a old, serene chapel, duefully guarded by a voluntering church member.

The story in the movie could very well represent many relic travelling stories. Indeed a Saint Matthias existed who got stoned, of which the stone as relic was brought to Rome and ended up in a German church 'for better use', to collect sums for church and political purposes.

Ireland was considered the End of the World in those days. Ireland was the subject of the first extension of England's common law legal system outside England. Monastic schools in Ireland became centers of excellence for peoples from all over Europe. It was interesting to see in this movie how several groups occupy the area and interact. Overall, the anger and spirit seem historically pretty authentic. (*)


(*) Initially I said 'accurate' in a tweet, so I was recalled by the writer who excused himself in a written reply cloaked as interview, mentioning it diffferently, and then RA rephrased even more.

This review I wrote in an attempt to get it closer towards newspaper format. As blogowner I still have the freedom to shape my posts. In the Middle Ages the most popular choice would have been a poem. Sir Raymond or his father would have paid poets who know how to laud combats in remembrance. My laud and remembrance ends with this. Can we tempt RA to do more French speaking films?

***
Quote (not in this film):
Au long aller, petit fardeau pèse.
On a lengthy journey even a small burden weighs.


***
For background context on medieval living in Ireland, I can recommend this easy-to-read book
The Edge of the World, a Cultural History of the North Sea and the Transformation of Europe
by Michael Pye.

Information on Saints I found in the book
Sanctus, recognizing more than 500 saints
by Jo Claes.