Scandal! Dare You Grow A Beard!

Bearrrrrrrded RA in stage play MacBeth of 2001. Please stare at beard, don´t read post.
Wanna hear gossip, scandal, slaunder?
This weekend I went to a play performed by English actors in Amsterdam
at the
Ho*lla*nd Fe*stiva*l
titled
"The Scho*o*l for Sc*anda*l", an 18th century play by Sheridan

Yes ME, Miss ´Arris goes to theatre, me! (referring to Paul Gallico´s books)
Why? To prepare myself for the impact that The Rover would have on me.
Even if RA would not do this play, it will be a nice research.
Don´t get yourself fooled, folks. I was brought up with operas and operettes.
~~~~~~~~~~~~~~~~~~

You´d never guess it, the British critics and audience didn´t like it! NOOOOOO! Well not all, but they DID have mixed opinions about it! And worse, they thought that modern dance music with flickerings of grafitti texts causing epileptic attacks between the costumised scenes and use of modern props would damage the whole concept of the SO BELOVED PLAY. And if that wasn´t bad enough.... every English man CAN TELL how this play should be performed! AWFUL!!! And what´s so lame, I SHOULD HAVE KNOWN that it was bad, because I read the reviews beforehand and still I wanted to see it. STUPID! Don´t rub it in, will you? I already paid for my ticket! YOU DID WHAT? I TELL
ALL OTHERS BEFORE THIS GETS IN THE NEWSPAPERS! So now I REALLY wanted to know what THE FUSS WAS ALL ABOUT!!
The Scho*o*l For Sca*nda*l played at the Ho*lla*nd Fe*stiva*l in Amsterdam.
It started with an introduction, followed by a fashion catwalk and picture taking, then the costumised stage play with surtitles in contemporary Dutch, ended with a meeting of the artist/director Debor@h W@rner.
Receivement
Director Warner was very taken with the receivement here in Amsterdam. In the earlier introduction we were told how severe the English critics bashed her adaptation of the very popular play. This fact was repeated again in the meeting. She had even written a letter to the Gua*rdia*n to protest against the harsh critic that she ´kicked the tradition´. Even non critics in London, like people in their fourties had strong opinions how this play should be treated. The Dutch in the audience loved it that she kicked the English tradition. Warner called the Dutch receivement a ´warm bath´ and her face showed endurement and a slight relief that the critic could also be different. All Warner wanted was to throw this play against the wall and see what drops and what sticks against the wall. She treated this play as if it was a new play. For the Dutch it certainly was a new play. However brought threehundred years too late on Dutch ground, it gave an insight to that era, especially with the current economic crisis on our minds. According to Warner it is an era well worth exploring.
Language
Warner explained that because the language of the play was not contemporary, the actors had to seek every fourth word in the dictionary. It was about 50 new words they had to learn. When I saw the play, I was seriously doubting my knowledge of English and peeked more than I wanted at the surtitle signs in Dutch. Sometimes I couldn´t understand a whole sentence.
The use of surtitles is a development Warner fears. She thinks The Globe (known for Shakespearian performances) would not get away with not using them eventually. The cast had to get accustomed to the use of surtitles in the handful of shows at the end of their tour over here in the Netherlands.
My impression was that the cast brought the play with caution. At first I thought it had to do with the harsh critics in London. What she didn´t say was that the cast had to slow down in their speed to match the four seconds the text was shown on the signs. I preferred the speed of second half ´the payback time´ to the first half, ´the buildup´. Sometimes the punch of the joke on the signs was absorbed in the brain before the said line was finished on stage.
Would it be better to rewrite this play in contemporary English? Yes and no. Warner loved Sheridan´s Brechtians way of writing, because it was ´gentle´. The actors had trouble with syntax, most and foreall. They used to break the sentence in half, and were glad to make to the first half. Some phrases would come across better if they were written in modern language, to get the crowd roaring with laughter. Cutting this play down from 3,5 hours to 1,5 hour, now that would be really harsh.
Kicking the tradition
Warner kicked the tradition with Mary Quant-like shake ups of scene changes and effective use of modern clothes as deterior, and modern props as recognisable, when someone asks ´How do you know?´ and another whisks out a smart phone. Warner did not kick the tradition with the original play which had mild shock effect moments. She also approached the characters in an English way. Some were played enjoyably funny over the top, which is considered not done by Dutch serious actors who prefer playing imploded characters. So one Dutch audience member surprised Warner a bit with the compliment that it looked like ´Fawlty Towers´. To which Warner replied: ´Maybe that´s your perception of how you see the English´.
Will The Rover be more daring?
If others would do plays of this era, Warner hopes that they would be more daring,
after what she has caused.
My hope is that ETT finds a nice middle ground to be more daring.

Yep, I Did It Again: Cartoons!

Taken from screencap of Spooks series 8. Is he really getting a Dwarf-size contract?
Taken from promo picture of Strike Back, combined with secret location in Hobbit Country.
Taken from tweeted pictures photoshoot of RA for upcoming August issue of Recognise Magazine
+++++++++++++
Hope you will appreciate them, nick and link ´em, and thank me for making them!
Posted by Violet op 22:09 5 comments:
Email ThisBlogThis!Share to TwitterShare to FacebookShare to Pinterest
Labels: ArtySmarty, John Porter, Lucas North, Richard Armitage 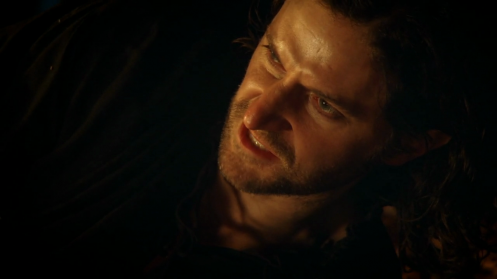 We´re back in limbo, waiting for RAW media storms! Last time I was hiding in a safehouse, avoiding the spoilers of Spooks series 9. Oh, those were the days! I had a great time, tweeting about my spy-tastic chores and to be honest, a bedsheet might come in handy. I was followed by someone called @SirGuyGisborne. This Man of Pleather tweeted about a bedsheet and I casually interacted the following, knowing that there´s two minutes time in between getting these tweets for replying.


A quick reminder of Guy of Gisborne by BBC:
He is "vain, brutal, ambitious, loyal, practical, unemotional, single-minded, boastful, frustrated, Gisborne's a selfish bully." Yet there still persists his delusion: the idea that Marian is meant for him.
STORY:  GISBORNE´S BEDSHEET 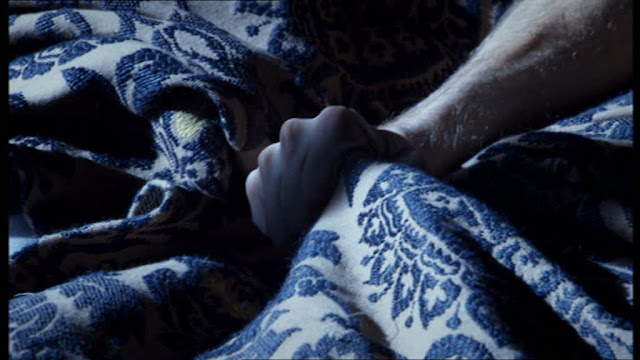 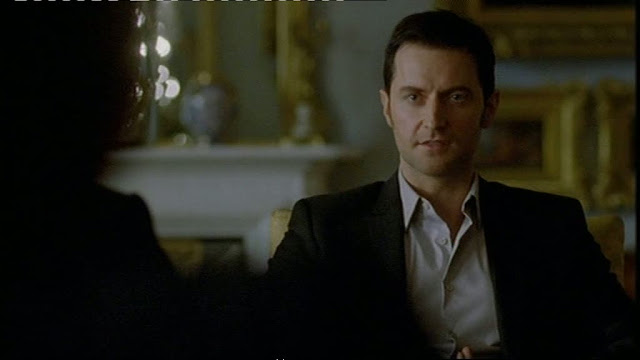 "Have you got a cello ´round here? I can strangle a cat with a littl´ tune!"
The Dwarves have taken time off of their difficult journey through horrible locations with the hungry Hobbit, Bilbo. The Hobbit has caused a stampede that he would climb in a tree if Thorin would play another song instead of finding food. Drat! No, no, only temporarily. This intermezzo sparkled thoughts.

Tom and Jerry - Cat´s Concerto  As a kid I've seen this hundreds of times, because we had it on film.
I forgot about it, until I saw it again, because the pianist Lang Lang mentioned it on a tv show as an inspiration for him to play the piano. It didn't make me to start playing piano, which was in our home already. What touched me was the music, as given, and connecting that with animals behaving as people. I like the expressions on their faces and the fact how to creatively make a piano concerto interesting to watch! Notice how difficult it is to recall well acted fake musical performances on tv or in film.

Prefab Sprout - The King Of Rock And Roll The last couple of weeks I been looking on YT for eighties popmusic, especially British. Something I sooo want to ask RA, but it is highly wise not to do so, is: Is he one of the hotdogs? I mean in the clip! :D This wouldn't be the last time I would hide under the table in utter shame. Play this one loud!!


~~~~~~~~~~
I'm going to the English play The School for Scandal, a scorching comedy written by Richard Sheridan (1751-1816) and contemparized by Deborah Warner. It's at the Holland Festival in Amsterdam and I booked it for the day that there is also a 'meet the artist' opportunity. It is written just after the Restoration period. Restoration comedies are not played here in Holland. The Rover, mentioned by RA to play in, was written by Aphra Behn, who worked as a spy against the Dutch!


~~~~~~~~~~~~~
To come back to my topic, filming on The Hobbit has momentarily stopped for one Hobbit and two Dwarves. Martin Freeman as Bilbo, proud owner of a Bafta for his role in tv series Sherlock, to film Sherlock series 2 in the UK. Aidan Turner as Dwarf Kili to film tv series Being Human in the UK. And for RA as Dwarfleader Thorin.. is it really going to be an acting intermezzo? Or is it to change tooth brush and head off to... place your bets now.. Hungary where filming Strike Back 2 will take two months June-July in which he as John Porter will appear in for "some" episodes... or for plain old London where script of Spooks episode 6 has been discussed and this series 10 has less episodes, 6 instead of 8 and this series will all be about Harry Pearce's file and plots. Adding the fact that Lucas North aka John Bateman is still on Twitter. Harry's scheme or... ???