Gisborne, A Tale Of Conflict 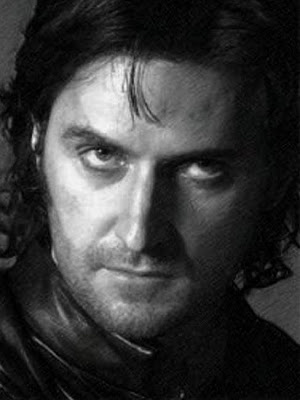 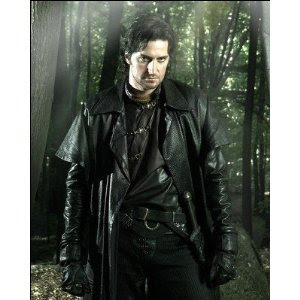 The man has tough life circumstances...

Clinging with Vasey about the castle keys...

Being tested by Marian beyond redemption... 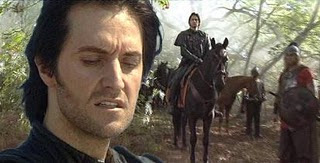 Yet maintaining the jurisdiction in the villages and the woods... 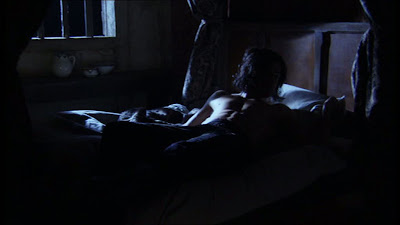 So is it strange he has sleepless nights about distroying Marian... 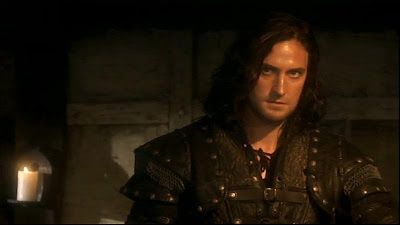 He is asked to prove his loyalty for the King´s brother... 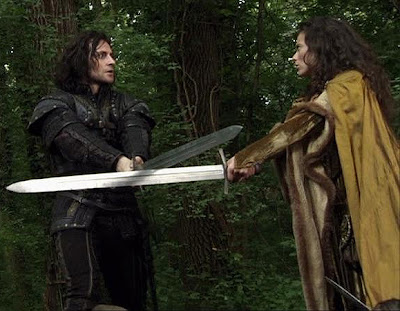 Not to mention his family... 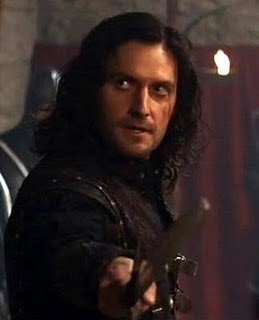 Therefore hitting the booze to have a cheerful work attitude?
~~~~~~~~
Finally on my blog a real post about Gisborne.
Screencaps. RichardArmitageNet, Elsewhere
Posted by Violet op 01:42 2 comments:
Email ThisBlogThis!Share to TwitterShare to FacebookShare to Pinterest
Labels: Gisborne, Robin Hood 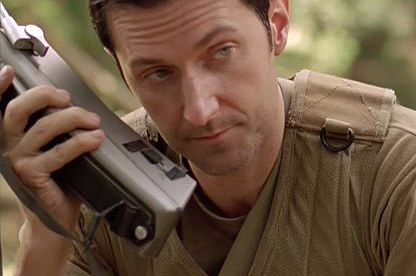 Send you a Twitter message? Yeah, why not. After this operation, OK?

If you don´t use Tw*tt*r, I don´t blame you. It´s been a couple of months since I signed up myself. Previously I read some tweets of strangers, but found it not entertaining enough. I didn´t see the use of it for me. Besides I didn´t understand the use of #hashtackwords. I even said so!

What did change my mind? I discovered I had a ´scoop´ with Spooks´ promo pics. I am now a news source for future reference! I am a medium now. I won´t predict your future, but you can try by asking?!

There are characters and characters on Tw*tt*r. You don´t want to know. Only once I mentioned the word Spooks and forever I was stalked by the Grid. Spooky!  Guess they have time on their hands. Then there are other characters of which I can´t tell if they are all official monitored fakes.
#Warning#
Especially the Spooks´ characters are portraying a parallel world on Tw*tt*r.
Sometimes even FAR BEYOND acceptable behaviour.
In the weeks in which an episode of Spooks was about to be shown, each week had a daily tantrum.
During the week, things like #Austenday were introduced, to get everybody dressed up for balls.
Boring days were those of merely #FF-tweets in which loyal tweeters were mentioned.
In the weekends, up to the minute of broadcasting, tweeters were asked to make #Spooks trending.
If I recall correctly, that succeeded only in the first couple of weeks.
Items of clothing had to be nearly taken off to gain these kind of results.

@_LucasNorth_ (John Bateman)
John Bateman is still out there. Communicating beyond the edge. Harry may need new lenses.
But back to Lucas. I was about to say he is short.. in sentences.
The only responses I get are: *hard stare*. He likes to send photo´s and vids of himself.
Runs around the place and drives his car on roundabouts. Can we trace where he is?
John so wants to retweet my Lucas´s stories of Series 9, before he jumps - off comms!
@PorterMI6
What can I say? Porter drinks, goes to the gym or for a jog, watches an action film on DVD, never displeases the ladies and gets a lot of naughty nice tweets. In short, #porterneverrefuses!
@SirGuyGisborne
He shouts, has horse troubles, cooks himself and gets into absolute humiliating situations.
He unfollowed me after I reacted with `"If more men start following me, then I will unbuckle my belt as well" on all the undressing of @Lucas_North and @DimitriMI5 in order to get #Spooks trending in these lists:´Great Britain´ or ´London´. Yes, and what is the purpose of that, gentlemen?
~~~~~~~~~~~~~~~


All that naughty behaviour of hundreds of followers led to a policy of suddenly reduced tweeting.
It became really bad, and it let to one blogger asking herself: is twitter fun or not so fun?
There are people who think it´s all out of character. Rumour goes that Kudos is behind it...
~~~~~~~~~~~~~~~
The geist of my blog is offbeat and hilarious. As all Tw*tt*r posts are registered FOREVER in a central place in the USA, I take my subjects and suspects as lighthearted as a Lady (18th Century) would, but with a nowadays twist. 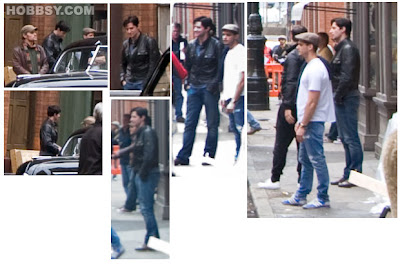 Some good came out of all that hilarious, but timewasting tweeting.
Besides to be interacting with those of you who send me tweets,
it´s nice to be the on top of the news.
For instance, to see, as one of the first,
photo´s of RA on the set of Capt. America in Manchester (http://www.hobbsy.com/)
if you are prepared to wade daily through the tweets of those you follow
(not everyday, I pledge guilty).
"I tweet, so you don´t have to"
*sends devious smile*


My PR-agent B. Arbie tells me I should use the momentum, be fearless and plug my tweets:
@VioletsTFB
She really said: "For crying out loud, throw it in their faces!"
If I can afford it, I will ask her trainees to do my tweets for me.
Screencap: RANet, Strike Back, episode 4
Posted by Violet op 21:06 6 comments:
Email ThisBlogThis!Share to TwitterShare to FacebookShare to Pinterest
Labels: Captain America, Gisborne, John Porter, Lucas North, Reflection, Spooks, Strike Back, tv-series 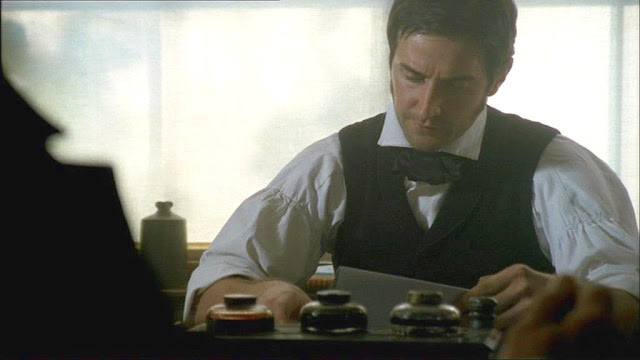 A letter is sooo oldfashioned these days, but it beats twittering any time!

Thanks for sticking with the programme: ´How to deRAil from Screen Captivity in your own time´.
It is with the utmost pleasure I can announce I have been content with the results up so far and your responses accordingly. Of course I had my qualms and hours of sleep deprivation, but that´s the hardship of a labourer of blogworks.

I must apologize for my meagre interaction with you readers, whether you are fellow bloggers or commenters. As this blogthing is just a hobby, last year I did spend numerous hours enjoying other people´s creations and I did keep in touch with the news. I spared myself by not reading much of the comments or reviews on other blogs or websites to keep my creations fresh.

For 2011 the credo: ´When you blog, you do not write´ speaks volumes to me. Since starting this blog, I stored a special writing project in my drawer. A project I couldn´t get round to finish it. Writing blogposts made me aware of the craftmanship of molding a short story and quickly gettting to its essence. Next to exploring the funny side in me and getting it out of my system, I am more certain now how to further this secret project and my posting sequence. So I shouldn´t be surprised, but I am, that I just very recently received two requests:
So it seems I can fill my blog and time very well!

If you want to be kept informed about this highly amusing programme, I will make sure that further awakenings of entertainment will be forwarded to you.

Best wishes from a writer in disguise,

Martin Freeman chats about The Hobbit film in Jools´ Annual Hootenanny 2010-2011.
And I missed that bit!
Wassail! Hootenanny!
Seriously, I feel like I am an outsider
when my English Dictionary doesn´t explain these shout-outs to me!
Yes, my dictionary talks to me, thanks for asking.
Martin Freeman was a guest in the crowd in Jools Holland´s yearly festive end of year programme on the BBC with performing artists and guests from the entertainment industry, like actors, comedians, and other musicians. It´s a programme I like to see who are there. This time I forgot to record it. Couldn´t check i-Player as it was not for show ´in your area´.
I can say I was chuffed to see his face on tv, just days before his journey to New Zealand to film there for, what´s it, 8-9 months. Especially reassuring was his choice of clothes, his green shirt and matching green socks, exuded that he was comfortable to play Bilbo. That gives a civilian courage.
It´s not just that he´s in The Hobbit, that I post about him. It´s his dry humour!
I´ve seen him in the series The Office, the original English version. You either hate or dig it. I found it fantastic! It´s full with embarrassing scenes. You don´t want to work with those people, but sadly you have to. Day in, day out!
Another thing I saw him act in was the tv-film Micro Men. It´s a tale about the competitive introduction of personal computers brought to the people of England. It was very interesting. I didn´t have a clue how that came about as I live in The Netherlands.
That all in mind, I recently watched the 3-part series Sherlock Holmes in which he´s a nowadays Watson. Bantering with sociopath Holmes he´s been perfectly casted in this!
But back to the Hootenanny programme. Martin Freeman sat next to comedian Jo Brand or she was put next to him. She made a sudden, funny-ish remark about a man Martin just talked earlier to. She said something like: "He really loves you!", which made him laugh. Then he replied: "He´s a great kisser!". He knows how to counter these remarks. He seems like he´s someone with whom you can have a nice and funny chat in the pub with. I suppose his reply would be: "Only a pub chat?".  Alright then, I will quote the Vicar of Dibley: "Come to the bosom of my bosoms!" (for a hug).
Hootenanny!
(whatever that means)
Jools´ Annual Hootenanny 2010-2011﻿
Posted by Violet op 02:29 No comments:
Email ThisBlogThis!Share to TwitterShare to FacebookShare to Pinterest
Labels: Acting, fame, Films, image, Reflection, The Hobbit

Lucky Escape On The Spooks Set For those who had sleepless nights about the location of photo of previous post, taking in mind the personal content of that article.. I stumbled on an older similar photo, while looking for Spooks pictures. It´s taken on the Spooks set! I assume that above photo was taken in the early days of filming Spooks.