Had to keep myself in my seat and not shout: RICHAAARD!!!!
Highlight seeing RA on the big screen in 3D: he´s coming at ya! 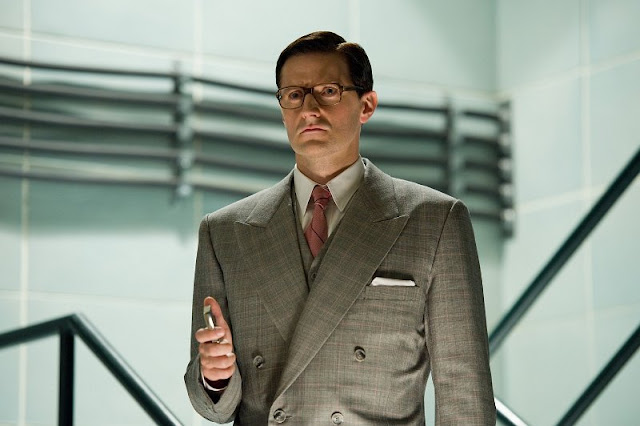 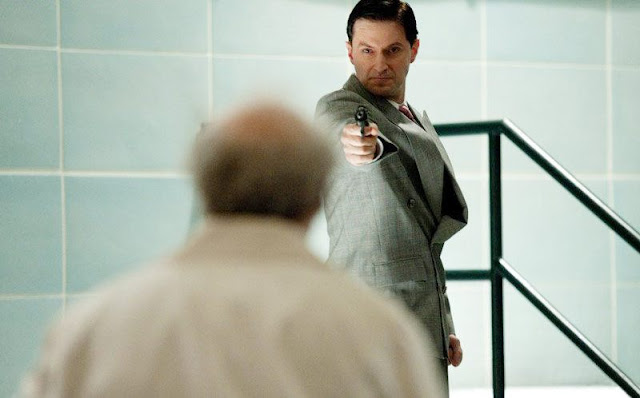 Toss the glasses, but mind the gap! 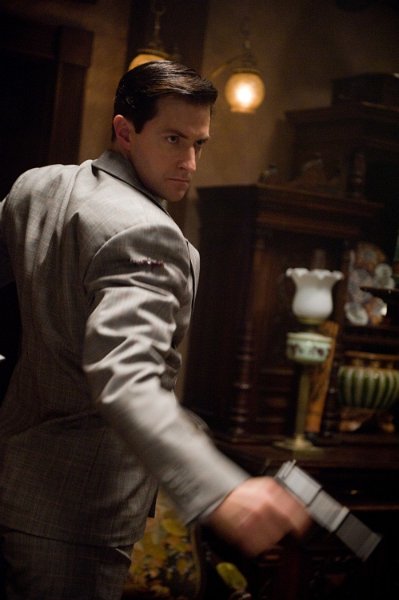 Shootout with a granny!
No, they won´t prepare you for that at drama school! :)
Sadly (or thankfully) these are ´all´ RA related images to post here.
(I did a selection, sorry. And I am sparing you in case you haven´t seen it yet)
Dying to tell you! (Others will, surely)
Captain America: The First Avenger

It was not my first experience with comic films. Superman and Spiderman films, remember those?
The Marvel related squee on forums: did not ring a bell. However I did read the Iron Man comics as a kid when visiting relatives. Those had a moral: do good and meet good, be bad, be squashed.
Found out that the Captain America comics were some 70 years old and that there´s about 50 stories.
Read the odd reviews.
With that in mind I came to the cinema.
This was Auntie Violet´s first experience with 3D.
So my eyes popped out of their sockets when the trailers of Conan the Barbarian ,
Green Lantern , Rise of the Planet of the Apes or so where shown before the main film started. 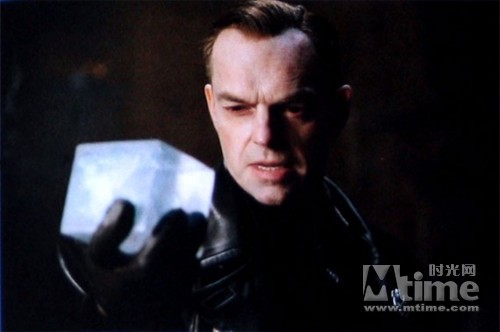 Overall, the film had well rounded characters in a nice story arc, a great cast and great special effects.
Two things I didn´t quite get.

The Krypton-like (that is really green energy) glass this character Skull (unexpected effective casted evil `LOTR´s Elf ´ and that multiplier guy from The Matrix, Hugo Weaving) is after (blue energy glass) provided hard to ignore thoughts of :`Should I connect this information to the things I just saw in the trailer of scifi comic Green Lantern knowing CA is a sequel and a prequel?´. And because of the fact that all these comic books and films tend to be related. Green Lantern mentions of a The Ring (no not that one from Lord of the Rings or The Hobbit) chooses this time a human as a guardian to keep a sector of the universe safe.
Connection to Hydra, Heinz Kruger´s solo action and Skull was not very clear. Hydra works for Skull, Skull works for H.. himself. Something that will be explained in The Avengers? Worth seeing I say so now, whether I would not have bothered before.

UPDATE: This was explained somewhat by RA talking about his character Heinz Kruger in this clip:
"I really tried not to see him as the bad guy"


On the work of the special effects arts department guys:
"It´s 60% of the work in kind of stimulating your imagination"

Tip: stay until the end: you will see a short trailer of The Avengers.

Conclusion: fairytale for boys.
Those comments by the boys in the audience were very helpful.
The guy who sold the tickets, found the film ´Vet´ (cool) and would like to see it again.
~~~~~~~~~


Secret 1:  I saw it twice, back to back. SHHH!! *grins* (no DVD then)
Secret 2: love to see more 3D films now, although the introduced films, judged by their trailers,
showed very simplified storytelling :(
Secret 3: I didn´t mind the ´2D into 3D´ kind of thing. 3D looks like cardboard pictures in a shoebox.
No secret: looking forward to the two parts of The Hobbit in 48 frames per second 3D!

On An Aesthetic Drip 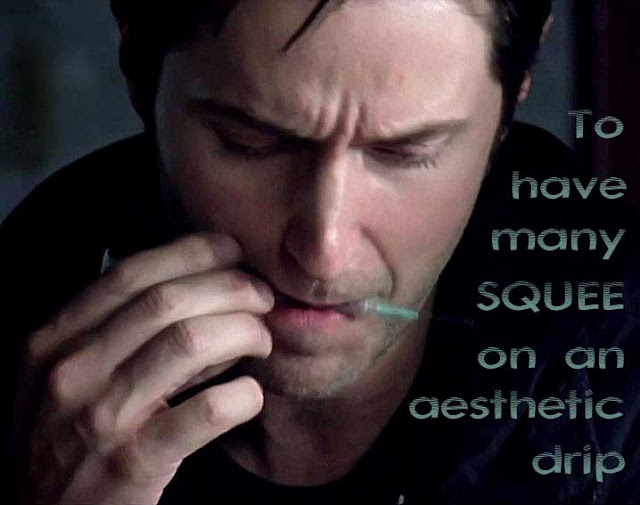 Causing a lot of inspiration are all the recent splash of interviews for Captain America, The Hobbit and in general that solved my RA drought. I made these drips. Have to make the August calender yet.

Above DRIP is from Spooks ep. 9.8 wherein hero spy Lucas North shows his dark side and puts colleague Ruth on an anesthetic drip. I probably have heard it wrong! The quote is also inspired on a previous read goal: "To have as many to entertain as possible" (help me out here, this is my vague memory recalling). Meanwhile to keep other memories alive, I am on a solid drip addiction, prescribed by Mr. A. and followers. 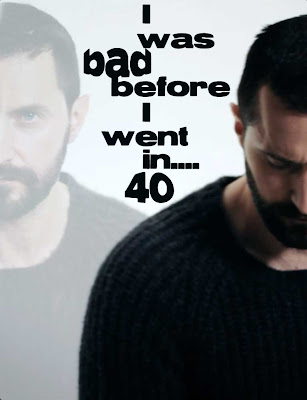 Above DRIP is from the Project Magazine´s photoshoot and the quote is from Lucas North to his boss Harry Pearce in that epic rooftop shootout of Spooks ep. 9.8. Don´t say the syntax is wrong!
I am thinking to make a similar one with myself in it. Maybe I will put that collage in the background of this blog coming month. Because why? The Man is hitting 40 in August and guess what, so will I ! 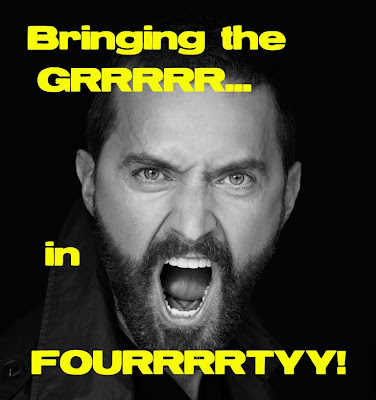 Above DRIP is also from the Project Magazine´s photoshoot and the quote is from Me, nailing the nailement of Mr. A. who understands what it is to have been constructed in 1971 and facing it all: "I have a life, career,  family, friends. I don´t need you". Ahem.. sorry, wrong counter quote from Lucas North´s former girlfriend Maya to Lucas in Spooks. Sidenote - according to a zodiac book, in referance to my birthdate in 1971, I should need the use of others more, instead of doing it all alone. When asked about 22th August of 1971, it was the same advice. Anyway, above DRIP is a moving fantastic inspiration for upcoming posts August Is Hot! Getting sentimental at my age! GRRRR!!!


Upcoming: August Is Hot blogposts
Will I be talking about The Beard, Thorin and Heinz? Mark your calendar!!
If you kind of feel left out of what I am talking about,
then hook on to http://www.richardarmitagenet.com/ to get your daily drips of RA dose.
Posted by Violet op 21:56 5 comments:
Email ThisBlogThis!Share to TwitterShare to FacebookShare to Pinterest
Labels: ArtySmarty, fame, Films, image, Lucas North, Richard Armitage, Spooks, The Hobbit, tv-series

Harry/Lucas: The Fall Out - Part I - First Breach

The Tazbeks don´t know what to make of the rogue actions of Lucas North. Previously overlooked information was re-studied and found clues were broken into segments. Infiltration in section D´s archives proofed to be necessary. CCTV footage was copied, filed and distributed among all Tazbekian spies, like Katja who should have written this report much earlier.
First day on the Grid after 8 years of imprisonment:
Lucas: Harry, you´d better arrange a flat with no bathtiles for me, ´cause a bathroom freaks me out!
Harry: I see you´re settling in.
Flashback to years of torture:
Lucas: I can´t take it any more... *sighs*
Meeting Ros en route:
Lucas: Ros, is comfort in my flat too much asked? Harry refuses Russian bath ducks.
Ros: Harry hates baths. Hairnet and tweezer are on the house. Alright, designer stubble too.
Secret tete-a-tete with former prison visitor:
Kachimov: You shouldn´t expect Russian bath ducks from Harry.
Lucas: I also expect soap and an apology!
Operation Seat Change aka Loo Roll:
Lucas: A toilet! Even in shitty locations I have to pull﻿!

Lucas: Harry would wish my sheet to be so clean as this toilet!

Lucas: Concentrate! Practice opportunity for delicate handiwork!
OK, intel where are you? In the loo roll?!

Russian Whisper: If you get me a drink, I will tell you were to find your package!
Lucas: Alright, but my real package is tax free!
Lucas: A kitchen! In operation Shakespeare Retold at least I killed the cook!
Now, where´s that package with my fake passport?

Back to the airport:
Lucas: I will scheme up something wonderful for Mr. Pearce as he doesn´t know me that well!