An Interview With One Fan 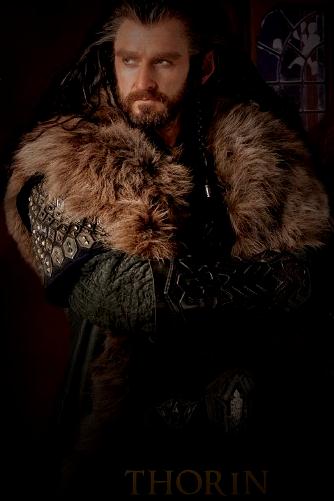 Misquoted Thorin:
"If more of us valued fangurrrling and cheer and song above hoarded gold,
it would be a merrier world."
"I said food, not fangurrrling!!"


The Hobbit has all sorts of fans and so does Mr. A. If you count yourself lucky to be a fan or follower, then you might like reading fan interviews.  Now be ready, because TFB is gonna throw this thing against the wall... and you may not like it... because TFB watched too many really gross American comedies lately, and got badly influenced.
The One fan can be female or male, so let's prefer the fangurrrl.
TFB: Hi, we talked over the phone. (reaches out to shake hands) I still don´t know your name.
One: Please, stick to THE ONE (shakes hands)
TFB: OK, The One (talks in voicerecorder: `Maintain ´One´)
One: (looks up)
TFB: Where shall we sit? Here?
One: Yeah, uh, alright.
TFB: One, first your reaction on RA as Dwarfleader Thorin.
One: Beard love!
TFB: What´s with the beard love?
One: (strokes beard with hands) I kinda like it. I grew it to sympathize with The Hobbit cast, far away in New Zealand filming this 3D monster of a movie..
TFB: Two movies! No, three movies!
One: You can count!
TFB: And write! But back on the beard topic. How did you get that beard so natural? Hormone pills?
One: Yeah, great, huh? (hikes skirt) I am now a female Dwarf.
TFB: (in Hobbit awe mode) A female Dwarf! You´ve read Tolkien´s footnotes!
One: So you know that Dwarves have females with beards! (leans forward) But in PJ´s version... (whispers) no romantic Dwarf love.
TFB: Are you putting up a smoke screen?
One: Good idea! (lights a long brown pipe) Yeah, well. (takes a few suckings, then exhales slowly)
TFB: Why do you smoke a pipe?
One: Fits with the character.
TFB: What character?
One. The one you bring forward on your blog!
TFB: (exaggerated) I can write whatever I like!
One: Oh really?! Why don´t you write some explicit love scenes?
TFB: Should I?
One: Want input? (exclaims) ´The Dwarf who shagged me`.
TFB: (coughs) It´s probably been done...
One: What? By whom?
TFB: I can´t tell you.
One: You suck.
TFB: No, you. You´re pipe needs tending after.
One: Oh thanks. (does heavy recovery on pipe) Well, where was I?
TFB: You being a female Dwarf?
One: If they are gonna change their minds... I am ready to be one!
TFB: (coughs) Hmm. Talking about one, you´re known as the One, why?
One: Once upon a time there was this actor I encountered and since then he keeps mentioning me.
TFB: I only found two or three mentions.
One: I had hoped he would keep it down.
TFB: You don´t think he did?
One: Officially yes, so I´m grateful.
TFB: You have stated to be called the One.
One: It must be me. I do grant every fan their chance meet with Mr. A, don´t get me wrong.
TFB: You referred to an encounter. Tell us more.
One: Sorry, these things are private.
TFB: You proclaimed him your respect.
One: Naturally.
TFB: You gave him a compliment.
One: Oh yeah.
TFB: You left him on his own.
One: What do you think?
TFB: What´s wrong about that?
One: (sighs) I could not believe I behaved like that!
TFB: How?
One: So.. so... so.. lost for words.... idiotic.. it was highly embarrassing! (knocks with pipe on the table)
TFB: So you did what?
One: Grow a beard! Helps me to be incognito. (plays with facial hair)
TFB: (stares)
One: Oh, you mean that! Walk on and ignore the fact for a whole year.
TFB: And then?
One: Own it. So I wrote him the letter.
TFB: In which you included at least chocolate and underpants, I dare hope? (winks at One)
One: No, no! I wouldn't... (looks worried) You think? (whispers) I didn't get the reply.
TFB: Maybe that's a compliment.
One: Maybe he glanced over it and still likes my weirdness. (smiles hopeful)
TFB: Who knows? Does it matter?
One: If it was his Mum that reads these letters, I hope I haven't upset his Mum.
TFB: Should I issue a formal apology on my blog for you?
One: (blushes) Must I? Sorry, I won't do it again, Mr. A - 's Mum.
TFB: I doubt it. RA tends to consider you to think of him as a piece of meat.
One: You take that back!
TFB: It's in the article, so it must be true!
One: I'm the last person who would think such a thing! In fact, he stated his fans were all so diverse! Besides, I do have my own set of male fans, thank you very much!
TFB: I don´t have time to hear about these sort of fan encounters.
One: (suddenly is fed up) You know what, I don´t have time for you as well! (stumbles over TFB, drops pipe and picks it up from the floor)
TFB: By the way, did you ask for an autograph?
One: No, I didn't ask for an autograph... Being mentioned is the highest regard! Although I could do with his convincing, romantic... (kisses pipe intensely)
TFB: (sighs) I think we're done.

Note of the editor:
The One shouldn't ask to be singled out, however the intention comes from a good heart.
TFB found mentions of ´One` in a letter of 24th December
and in one interview 'More Than Just Spy Candy' (both from 2010)
TFB remains to be a sane observer of RA's acting and his following.
Picture: from The Hobbit Movie promotion (WB) with a magic touch by TFB
Posted by Violet op 20:36 No comments:
Email ThisBlogThis!Share to TwitterShare to FacebookShare to Pinterest
Labels: fame, Fanfiction, image, Reflection, Richard Armitage, The Hobbit
Newer Posts Older Posts Home
Subscribe to: Posts (Atom)