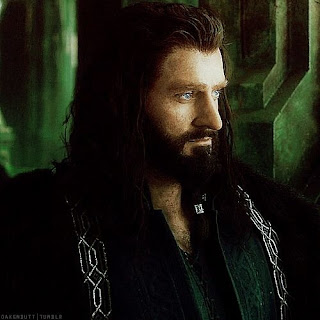 Thanks to my personal dragon sickness called ´hobbit overload´,
and the gnomes being away on re-enactment Hobbit tour,
in halfnaked, body painted shape, because it´s crisis,
I totally missed an interview with
Thorin Oakenshield!


You´re in Wellington now. What do you think of this place?
TO: Windy. I met this Dream Catcher - a Film Maker - who provided us quarters, in exchange for us running along green walls for so many days. He doesn´t talk to us much, but when he said: ´Do you have another take in you?´, I nearly vomited. I suffer from dragon sickness, for goodness sake!
How did you get here?
TO: We! After 266 days of working hard to get one backpacking Human Male out of Middle Earth.
And by ´we´ you mean?
TO: My group of Dwarfs, me and this Human.
You mean Richard Armitage. What was he like when you met him?
TO: Really bad mannered. He didn´t have a beard at first. Why don´t you have a beard?
I´m Human too and Female.
TO: Ah! He offered us some leftover wine which he had in his rucksack. Then he had the nerve to share trivialities about me in public, in front of my group of Dwarfs.
Like what?
TO: You really want to know, do you? Fine. He mentioned my family history, my personal habits and my tumultuous love life, or lack of. The last ones were awkward, because I know for sure I don´t have that kind of information registered in the ancestry annals of my Kingdom. So I became very fishy whereof these stories came.
You made him sign a contract?
TO: I hate whiners. I had to put up travelling with one Hobbit once.
To my knowledge it was Bilbo the Hobbit who wrote it all in his journals.
TO: That stay-at-home impostor! Urged us to give him the best adventures, so that he had something to tell these lazy Hobbits when he came home! Now I get it!
It was Gandalf the wizard who brought you together?
TO: Huh! Divided my group of Dwarfs, more likely! Gandalf disappeared constantly, because of his horrible knowledge of group dynamics! That children´s book was written afterwards, remember?
Tolkien? He was known to make or break worlds.
TO: Don´t mock with those notions! I suspect Baggins to have written that historically incorrect book.
Back to Richard. In interviews he mentioned finding you was like working his majestic muscle.
TO: Working?? You know what, he came to know me, when we found him lost in Mirkwood - which I can´t talk about...
You just did...
TO: Because his career people won´t allow me to - so he should not moan.
He´s not moaning. He seems to know you like he was your friend.
TO: Did he? Fair enough, I didn´t let protocol get in the way. What I wanted to say was, he´s a very poor fighter. He wanted - you won´t believe me when I tell you this - he wanted us Dwarfs to train him for the Battle of The Five Armies. Pure suicide! So hours and hours of training went into that poor fellow. I even lend him my sword. And how did he respond? He sat down with his eyes closed. Yoga, he called it! Did he thank me when we saved him from the Giant Spiders - which I can´t talk about, because of his career people? I ignored him like I ignore Hobbits!
You hugged him like you hugged a Hobbit.
TO: Well, yes. There you have your majestic muscle. And now, he´s calling me his friend?
You´re his friend and more than that, you wouldn´t leave him.
TO: Alright, I am staying with him. You know what, we even swapped places, so he´s is me and I am him for some time until August, or that´s what we let the press believe you!
So am I talking to Thorin or Richard now? * eyes at PR woman who nods *
TO: For the record, it´s Thorin. * eyes back at PR woman to end this interview *
If so, this interview with you could become legit.
TO: I offered to deal with his fans for him, but he wouldn´t let me. Said I wouldn´t pay respect to Human Females! Of course not, you don´t have beards! But for you I can change... Human Princess, wouldn´t you like to know that dragon sickness cannot be spread by my kissing...??
Err....